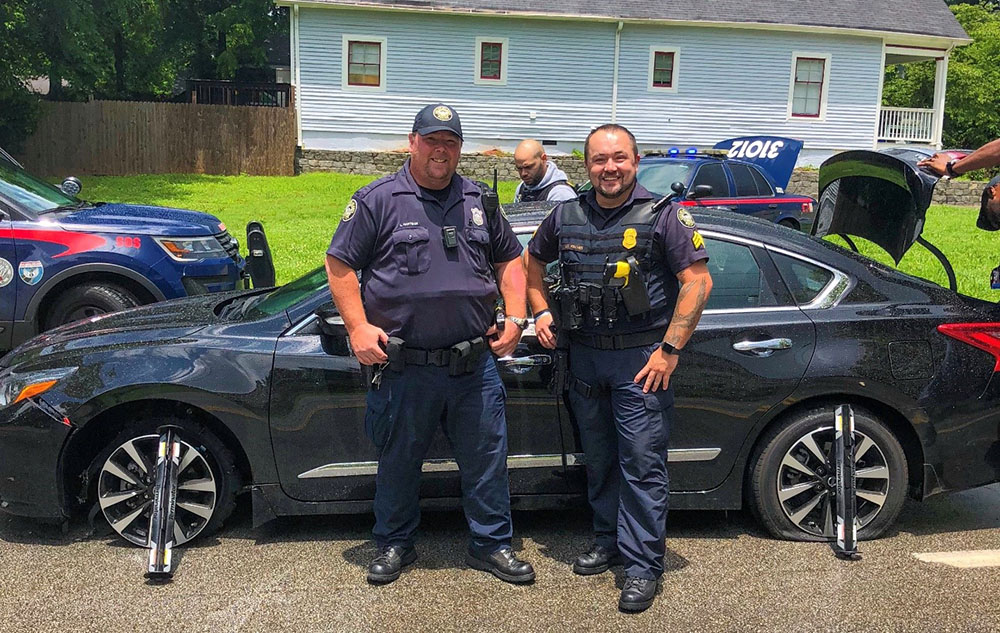 Controlling crime and stopping criminals in large and mid-size metropolitan areas comes with unique challenges. In these urban environments, where the population can range from several hundred thousand to millions, violence and property crime rates are three to four times higher than those in rural communities.1 Officers in large cities often have wide and densely populated areas to protect. They can face increased issues with public perception. Philosophies and policies dictating rules for police pursuit may vary depending on the position of government officials.
Stop Stick® at work for the Atlanta Police Department
The Atlanta Police Department faces many of these common large-metropolitan area challenges. Stop Stick tire-deflation devices have been a part of the Atlanta Police Department’s arsenal for years, according to Sergeant Andrew Fincher. However, in the last few years, the department has begun relying aggressively on Stop Stick to help enforce the law, stop pursuits and save lives. It has reduced property damage and the risk for injuries to the public, officers and even suspects.

This change began shortly after Fincher himself was hit and injured by a perpetrator. Following this incident, Fincher began researching and examining the department’s policies for areas of possible change and improvement.
The impact of mobile criminals
“In Atlanta, auto-related crimes drive a variety of other crimes,” says Fincher. “While attention often focuses on violent crimes, in any given time period, more than 50 percent of Atlanta’s crime is auto theft or auto-related.”

While these are property crimes, they enable criminals to become mobile.

“We’ve moved to a more aggressive model to try to catch the criminal element while they are mobile,” Fincher explains.
Using Stop Stick® safely within the urban environment
“Of course, we can’t just haphazardly chase every car that runs from us,” Fincher says. “Atlanta is an urban environment. It is very dense and there’s constant traffic. There are many variables in play in any pursuit.”

This may include nearby school zones or areas of heavy pedestrian traffic.

“As much as the public wants us to catch criminals, we have to do it in a manner that brings about the least amount of risk to the public,” Fincher explains.

Safety of the public is the very reason the Atlanta Police turned to Stop Stick. It’s about mitigating risks to the public and property.

“Our need to apprehend can never outweigh considering any risk to the public. That’s where Stop Stick comes into play,” Fincher adds. “If there’s a way to stop suspects in their flight from justice … if we can flatten the suspect’s tires or, at minimum, disable the vehicle and keep it from fleeing or entering a busy intersection, then we can hopefully catch the suspect on foot, or at a minimum, apprehend them later.”
Examples of Stop Stick® success
Atlanta PD has been extremely successful in utilizing Stop Stick. “It’s a great tool and we’re using it a lot,” says Fincher. The Atlanta Police Department primarily uses Stop Stick in the nine-foot and twelve-foot lengths and the two-foot Terminator® pursuit prevention device. Last year, the department had 21 “hits” using Stop Stick where they safely and successfully ended pursuits. Fincher has many individuals in his unit with multiple hits using Stop Stick. One officer has successfully deployed Stop Stick five times this year alone.

“Statistically, the vast majority – 90 percent – of vehicles are disabled with Stop Stick within one mile or less,” Fincher adds. This allows suspects to come to a controlled and safe stop.

“Stop Stick solutions are flexible,” says Hugh Campbell, Stop Stick National Sales Manager. “Stop Stick can not only be used reactively to stop fleeing vehicles but can also be used proactively for prevention. The Terminator® is great example of this.”
Stopping pursuits before they start: Terminator®
One of Fincher’s officers, Zachary Fore, earned the Stop Stick Hit of the Month recognition from Stop Stick, Ltd., in March for his deployment of Terminator®. Fore was able to use the Terminator® to puncture all four tires on the vehicle of a suspect who had more than 50 outstanding warrants.

Fincher explains that the Atlanta Police Department uses Terminator® as part of undercover operations, when a helicopter spots a parked stolen vehicle, or when an officer suspects a vehicle’s driver may flee. If the suspect’s vehicle is stopped, officers can deploy Terminator® at strategic exits. “The Terminator is excellent because it causes an immediate deflation of tires,” Fincher says. “As the perpetrator tries to flee, their vehicle becomes immediately disabled. There’s no gradual deflation of the tires. It’s instant and halts the pursuit before the pursuit even happens.”
Safety first in training and deployment
Proper training is key to maximizing the effectiveness of Stop Stick for Atlanta. While the department is proud of its results, the safety of its officers is always first and foremost. “We place a lot of emphasis on safety,” Fincher says. “This includes safety for the officers, the public and even the suspect.”
Keeping officers safe with Stop Stick®
“I teach a lot of classes with Stop Stick and the number one priority of Stop Stick is officer safety,” says Fincher. “We want to get this deployed and get the vehicle stopped, but the officers have to be safe in doing it.”

In recent years, the Atlanta Police Department has conducted sessions to train more than 240 officers from their own and neighboring agencies who have adopted Stop Stick solutions. With support from Stop Stick, Ltd., officers learn that safety takes mental and physical preparation. They consider lower traffic areas, low traffic times and weather conditions as they study the right ways to deploy Stop Stick. Training includes classroom curriculum and lectures, training videos and practical exercises.

Atlanta sets up a safe training environment on isolated or secured roadways with speeding vehicles so officers can practice how and when to properly throw and successfully retract devices. They use Stop Stick training sets that have the same weight and feel as actual Stop Stick but use sand foam instead of tire deflation inserts. “It’s one thing to show a video, but it’s another thing to have a training vehicle accelerating down the street to replicate what officers will see from a fleeing criminal,” says Fincher.
Top training take-aways: Safety first. Consider all alternatives. Communicate clearly.
Safety. “In our training there’s a huge practical aspect, but more than anything, all training is safety-driven,” Fincher emphasizes. “These suspects are fleeing. They don’t care who or what they take out in their flight. They are not going to think twice about striking an officer or patrol car. The safety of my officers always comes first. We teach how they can deploy the device without putting themselves at risk.”

Stop Stick, Ltd., recommends that officers always seek protection when using Stop Stick as well as spend the least amount of time on or near the road. These practices reduce the risk of injury when deploying Stop Stick tire-deflation devices. “There are protected areas on roadways, even in urban areas,” says Campbell. “And it doesn’t take long to deploy Stop Stick. It’s feasible to get Stop Stick from trunk to target in ten seconds or less.”

Slowing it down to consider all alternatives. “Police officers are tasked with the craziest situations and often have only microseconds to think,” says Fincher. “Training is about preparing officers in those high stress situations to be able to think with a level head. We constantly emphasize to ‘slow it down.’ In other words, avoid ‘tunnel vision’ and slow down your thinking to consider: What are all of my options? What are all of my potential outcomes? Is this going to be safe? Is this going to be effective? Do I think the suspect is going to turn this way? If I deploy here, where will the suspect be disabled?”

Communication among the team members is key, as Fincher adds. “If there’s a pursuing officer and Stop Stick devices are employed ahead, that needs to be communicated.” It’s a team effort.
Confidence in Stop Stick
Fincher sees a remarkable amount of confidence in officers after the practical Stop Stick training. “Pro-active officers are especially excited to get the product and have the ability to disable criminals’ vehicles and get an apprehension.”
Stop Stick® now and into the future
Stop Stick is a proven tool for today’s and tomorrow’s policing.

In 2015, the Department of Justice emphasized the use of de-escalation techniques, defining “de-escalation” as “the strategic slowing down of an incident in a manner that allows officers more time, distance, space and tactical flexibility during dynamic situations on the street.”2

Police departments like Atlanta, Chicago3 and others are adjusting their policies to reflect de-escalation practices.

“This is 21st century policing,” Fincher says of his department’s use of Stop Stick. “We are tasked with apprehending criminals, but we need to do that without causing undo harm to the public and their property. In order for a metropolitan police department today to be successful, you have to be acceptable to change. You have to be multi-faceted, flexible and know when to utilize a product. This is especially important in a dynamic urban environment and finding the right balance is a big part of any effective plan.”

“With Stop Stick, the more patrol units that are equipped, the more opportunities we have to end that dangerous situation before it reaches that critical point. We are tasked with upholding the law and catching criminals,” says Fincher. “But we have to follow policies; we have to follow procedures. We need to find a way to use any and all tools available and do our jobs in the safest manner possible.”