May Hit of the Month: Michigan State Police

Hit of the Month: May

The winners and Nominees for Stop Stick’s Hit of the Month for May 2022.

“Hit of the Month” is Stop Stick, Ltd.’s program to recognize truly outstanding performance results coming from the successful deployment of Stop Stick® Tire Deflation Device in ending pursuits. Every month hundreds of reports are received from across the country documenting successful deployments of Stop Sticks®. These reports detail stories of exceptional police work and proper deployment of the Stop Stick® Tire Deflation Device to bring pursuits to an end safely. Below are the departments that were nominated from the hundreds of submissions, and the ones who have been selected as the “Hit of the Month”.

Michigan State Police with the assistance of Lansing PD, Livingston Co. Sheriff’s Office, and Oakland Co. Sheriff’s Office engaged in the pursuit of 5 New ZL1 Camaro’s (Valued at $375,000) that were stolen from the General Motors Plant. The stolen Camaro’s attempted to flee at extremely high rates of speed, which caused pursuing Law Enforcement to act before the fleeing suspects could cause any harm to the public.

Four of the Stolen Camaro’s were traveling together on E/B I-96 as they attempted to ditch the pursuing Law Enforcement, Trooper Black, was able to position himself out in front of the pursuit on I-96 and deployed two sets of Stop Sticks covering all three lanes of the Highway. As the pursuit neared Trooper Black’s position, he stated that the vehicles continued traveling at up to 153 MPH before inevitably hitting the pre-deployed Stop Sticks, all four of the Stolen Camaro’s quickly became disabled as a result of hitting the Stop Sticks, causing the suspects to attempt to bail out of the vehicles on foot.

Michigan Troopers with the assistance of Lansing PD, Livingston Co., and Oakland Co. Deputies managed to capture all 9 of the suspects shortly after they bailed out on foot. Not long after the fifth Stolen Camaro, was located by another nearby agency and was arrested. 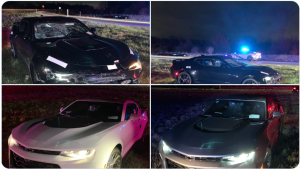 Broome County Sheriff’s Deputy, Sgt. Mauser Deployed Stop Sticks to stop a Drunk driver from being pursued by the New York State Police. The suspect had failed to comply with State Troopers’ attempt to stop the vehicle causing Troopers to give chase. The suspect vehicle continued to travel at roughly 35-40 MPH for 15 miles on Tour 88W before Troopers radioed ahead to ask Broom County Sheriff’s Deputies to assist by setting up Stop Sticks. SGT Mauser positioned himself up ahead of the pursuit deploying Stop Sticks from cover. When the suspect vehicle reached his location Sgt. Mauser was able to execute a textbook deployment puncturing all four of the suspect’s tires causing them to give up less than .5 miles after hitting the Stop Sticks. NYSP was able to take the suspect into custody without any further incident.

Arizona DPS Deployed Stop Sticks on a vehicle that had initially been fleeing the Lordsburg New Mexico Police Department. At the time of the deployment, the suspects had already been on the run for over 90 miles, driving recklessly and at excessive speeds.

AZDPS Troopers Drummond and Peterson deployed their Stop Sticks at the same time in a staggered pattern to cover all lanes of traffic. While in cover the Troopers waited for the suspects to near their location, as the suspects approached their deployment location the target vehicle attempted to avoid the first set of sticks by swerving only to find the second set of Stop Sticks in the alternate lane. The target vehicle failed to navigate around both sets of Stop Sticks, resulting in 2 flat tires. The Suspects along with 10 undocumented immigrants eventually bailed out of the car 2 miles after hitting Stop Sticks. The suspects and immigrants were eventually captured without further incident and turned over to the USBP.

Deputy Woods deployed Stop Stick after being advised of a pursuit originating from neighboring Garvin County that was traveling on Highway 177 in his direction. Thinking quickly Deputy Woods parked his patrol vehicle in a driveway just off of the highway, the pursuing deputies radioed to Deputy Wood to be on the lookout for a black ford mustang, As the Deputies maintained radio communication providing Deputy Woods with pursuit updates, He advised the pursuing units that stop sticks were deployed.

The Suspect vehicle then traveling 115-120 MPH was driving erratically and entering oncoming traffic causing Deputy Woods to position himself and the deployed Stops Sticks so that he could pull them in front of the target vehicle no matter what side of the road it was on. When the Suspect vehicle approached Deputy Wood’s location it attempted to swerve to avoid the Stop Sticks only to end up running them over with both passenger side tires. After making a successful hit, Deputy Woods removed Stop Sticks from the highway and rejoined the pursuit. Several minutes later pursuing units advised the suspect had wrecked out and bailed on foot into a wooded area.

When Trooper Woods arrived on the scene, he began to pursue the suspect on foot chasing him through the woods, and a creek, and eventually making the arrest in a clearing just on the other side of the creek without any further incident.

To register for Stop Stick® Hit of the Month, please submit a Deployment Report using the Link: https://stopstick.com/deployment-report/

You can be considered for Video of the year by uploading Dashcam, or Bodycam footage after submitting your Deployment Report.
If you know an officer who should be nominated for Hit of the Month please submit a pursuit report: https://stopstick.com/home/pursuit-reporting